OK so after what seems like an age, I have finally managed to get round to blogging down my initial thoughts on the first Monitoring Solution I have evaluated.

Disclosure: This review has not been sponsored in any way, and is just my opinion

Firstly big thanks to Mike Riley  and Ray Wood of ScienceLogic for coming in and running me through the setup and initial config of EM7. While not particular difficult it does make my life a whole lot easier, and gives me an opportunity to ask all the questions I might have. Plus in my view this shows a good indication of customer service, and makes a change from the “Just download an Eval and get back to us with any questions” type attitudes.

Ease of install:
ScienceLogic EM7 supports a distributed model or a Stand-a-lone “All-in-One” Model for smaller environments. I choose the All-in-One option, where all components reside on the same virtual appliance.
I created a Virtual Machine with the recommended specs, 8GB RAM, Mounted the supplied ScienceLogic ISO then went through the very easy wizard driven initial install. To define settings like Hostname, Admin Username and Password and IP address.

Ease of Licensing
Again very easy just browse to the IP address of the virtual appliance port number 7700 download your reg file, E-mail the reg file off to ScienceLogic and they mail back the licence file which you then just upload in the same screen.
EM7 is licensed on a “per Monitored entity” basis, so as an example the system will detect and monitor a Cisco UCS Blade and VMware ESXi Host. Now these 2 entities may all represent the same logical workload, but will be separately licensed and monitored for statistics pertinent to that particular entity, i.e. the Blade will be monitored for x and the ESXi Host Monitored for Y. So while this may be seen as a licensing “inefficiency”, I can see the logic and value in having these entities split out.

Now one of my questions was that “if I had an issue/fault with a blade, would that issue show up as a potential impact to my Application” i.e. is the system clever enough to know that my Exchange server is running on Blade X, which has just started reporting memory problems.
The answer was “Yes”, but at present this would be a manual merge exercise, i.e. I would need to make a manual association between the Blade and the Exchange Entity.

But just to clarify EM7 would do a thorough job at monitoring the application and running test transactions against the particular application to ensure the application is running within the defined parameters.

Cisco “UCSishness”
ScienceLogic has a Cisco UCS “Power-Pack” which is a pre-configured template which knows how to discover and monitor Cisco UCS. Once the Cisco UCS has been discovered it will appear as a monitored device as shown below:

I really liked the layout of the Cisco UCS Topology as it clearly shows all the components and the current state via Colour codes. Each entity can be drilled into for ever increasing granular information. There is also a “Cisco UCS Central” Power-Pack which gives visibility and statistics from a UCS Central instance. Once the Cisco UCS System is discovered statistics and parameters of each entity are collected.

Each entity has an associated “Asset Record” which contains info like

Model, serial number
Maintenance details
Owner details
IP, upstream switch
And loads of other info as well as a free text section for other vital or relevant info

I noticed that most of the above fields needed to be manually populated, which I can fully appreciate for variable details like “Owner” Details, but was surprised that details like Serial Number were not auto populated. But have been informed that assuming these detail are available from the API, ScienceLogic will be adding additional asset information in a new release of the UCS Power Pack.

Likewise EM7 can integrate with a ticketing system like remedy.

The Figure below shows the ScienceLogic VMware view from the vCenter server down through the hosts to the individual VMs. 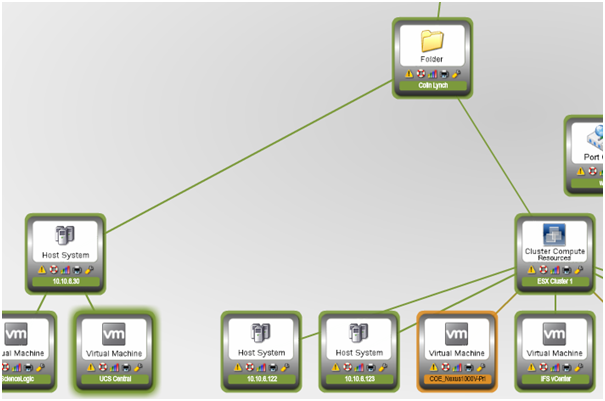 EM7 is a big product, I’m sure with the time I had I only scratched the surface of it.

Scores:
A bit difficult to grade some of these as this was the first product I reviewed, so I may tweak scores up or down as I review more products and can make comparrisons. 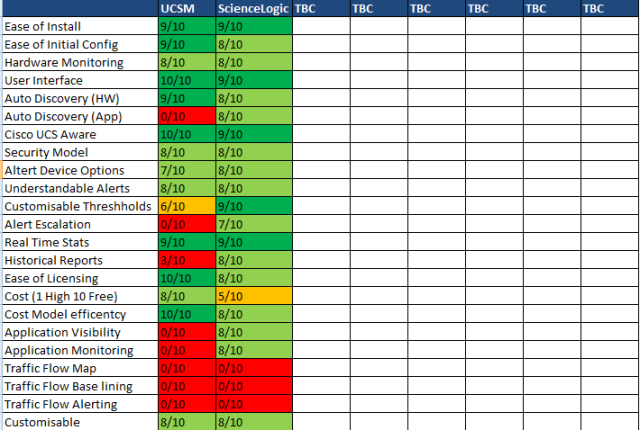 Principal Consultant and Data Center Subject Matter Expert. I do not work or speak for Cisco or any other vendor.
View all posts by ucsguru →
This entry was posted in Monitoring. Bookmark the permalink.